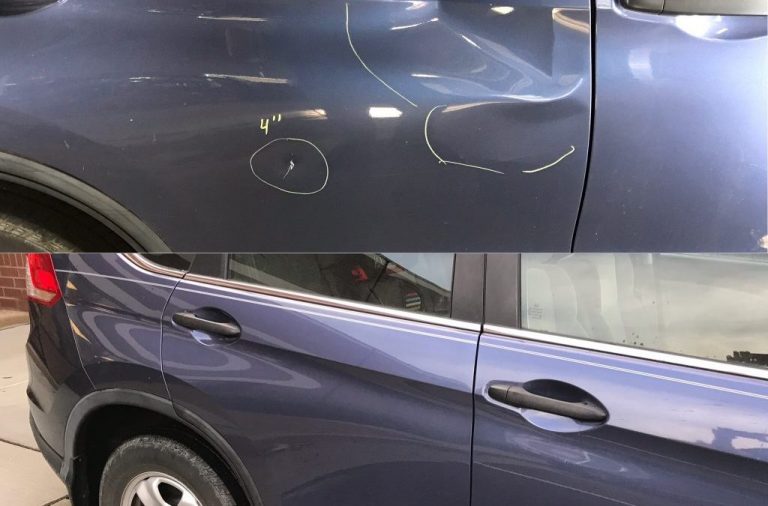 What Is Paintless Dent Repair and How Does It Work

Many automobile owners are still unaware of paintless dent repair, despite its growing popularity. It is well worth getting at least the basic knowledge of this cutting-edge restoration procedure because it may frequently be a way more efficient and cost-effective approach to handle auto body repairs. That is why we have compiled a list of PDR information you may not be aware of.

Paintless Dent Repair (PDR), is a cost-effective and ecologically responsible process of restoring a vehicle’s body into factory-like conditions in a fraction of time. Vehicle dings and dents, and damage can all be removed with PDR as well

PDR is frequently misunderstood as simply being suitable for minor dents. This could be due to the fact that this is a common method for dealing with damage. However, most people are unaware that this is effective for damage up to the size of a coconut.

One of the most important advantages of paintless damage repair is that it is usually significantly faster than most traditional dent repair methods. We all know that without our vehicles for an extended period of time may be a huge inconvenience in today’s fast-paced environment, Well, PDR changes that since it allows for a speedier turnaround, with many repairs taking only a few days.

PDR is still a long-term fix. Many individuals wrongly believe that the dent will pop back over time because PDR involves bending the metal. This isn’t the case at all. After the dent has been fixed, the damaged panel will have the same strength as before.

So, why just not contact Vancouver professionals about PDR if your vehicle has an unattractive dent?

What Types of Damages Can Be Fixed Using Paintless Dent Repair?

Dents, dings, and body creases can all be removed using Paintless Dent Repair. PDR is a specialized technology for swiftly and cost-effectively restoring vehicles to their factory condition. Furthermore, if the paint is undamaged, the dent, ding, or crease is probably repairable with PDR. Additionally, PDR is an ideal solution for restoring your vehicle to its excellent shape for all types of dents, from little damage to huge folds.

Standard PDR is fairly quick and may usually be finished the same day. PDR times, on the other hand, might vary depending on the severity of the damage, such as its size, location on the car, and the number of dents, dings, or creases. Hail damage, in particular, can take several days to properly repair the vehicle’s surface area.

What Is the Process and How Does It Work?

A qualified expert who is trained for paintless dent repair, will be capable of working on your vehicle. Paintless dent removal could also be done poorly while fully fixing the problems without qualifications or years of work experience, which is why it’s critical to visit and choose a trustworthy dent repair service.

To do this, the expert will first analyze the extent of the damage to your car and depending on the damage or a significant amount of dents. Although not all shops offer free in-person estimates, your insurance company must receive an exact, expert estimate of the costs of repairs in addition to receiving the right amount in your payment. The technician will then have access to the damaged panel’s underside. Afterwards, the expert uses industry-grade instruments to apply pressure calmly and steadily until the dent is gone, using specialized lighting that thoroughly shows the dent cavities.

If you need experts in PDR, you can find it in Vancouver. You can notify them if your car has recently been damaged.

Why is PDR a Better Alternative to Traditional Dent Repair?

In traditional dent repair, paint or body filler is used to cover in car body dents, which is then coated to fit in with the rest of the car’s appearance. While this procedure can restore a vehicle’s appearance, it does not address the underlying dent in a way that is long-term and maintainable. It’s also time-consuming, costly, and can lower your vehicle’s resale value.

Paintless Dent Repair, on the other hand, does not necessitate the use of fillers or sanding. PDR is increasingly being recognized as a viable and cost-effective alternative to having minor repairs done at a body shop. PDR provides more “value for money” than standard dent repair treatments and is a cost-effective approach to maintain the outside of your vehicle.

Why is PDR The Best Option?

Most dents, even significant ones, can be fixed with PDR. If a damaged panel is unreachable or even the dent is too closed to the panel’s edge, they’ll have to resort to other methods. Besides, PDR is ineffective on panels with broken or damaged paint.

Paintless dent repair is a simple and quick procedure. It doesn’t need to be filled, sanded, or painted. First, you will be able to save money. Second, it allows you to get your car back from the mechanic considerably faster. That isn’t to say we don’t take dent removal as seriously as other fixes. Every vehicle that professionals repair goes through a seven-step process that starts with a precise repair plan but also ends with stringent quality control. In the end, PDR restores vehicles to a state that is closer to their original state than regular pounding.